Air masses and their sources

Air masses bring variety of weather. Six basic types of air masses affect the weather of the British Isles. They can bring anything from tropical warm and humid days to arctic cold depending on the type of air mass. Fronts form the boundaries of air masses with differing properties. The most severe weather usually occurs when dry-cold continental polar air clashes with warm-humid maritime tropical air. 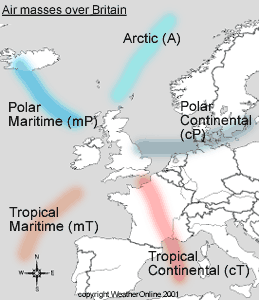 The term 'air mass' was introduced some 70 years ago by Norwegian meteorologists from Bergen, Norway. Air mass is a large body of air, whose properties - temperature, humidity and lapse rate - are largely homogeneous over an area several hundred kilometres across.

The nature of air masses is determined by three factors: the source region, the age and the modifications that may occur as they move away from their source region across the earth's surface.

The primary classification of air masses is based on the characteristics of the source region, giving Arctic (A), Polar (P) or Tropical air (T), and on the nature of the surface in the source region: continental (c) or maritime (m). In addition, a large variety of secondary types of air masses are defined. For example, equatorial air (E) or Mediterranean air. Sometimes there is a letter (k) or (w) attached to the two-letter initials indicating whether the air is wa rmer or colder than the surface. The former becomes more stable, and the latter more unstable.

Some older works use the term of an 'returning air mass'. This usually refers to maritime polar air that has been altered moving across the relatively mild Atlantic and is returning polewards eventually.

The air masses prevalent for the British Isles are:

Continental arctic (cA): Extremely cold temperatures and very little moisture. Originating over the Arctic ocean in winter, when high pressure dominates and differs only slightly from the continental polar (cP) air masses that develop over Siberia and northern Canada.
Maritime arctic (mA): From the same source region, but less dry and less cold - in a way less extreme.

Continental polar (cP): Cold and dry, originating from high latitudes, typically as air flowing out of the polar highs. This air mass often brings the rattleing cold, dry and clear weather on a perfect winter day and also dry and warm weather on a pleasant day in summer.
Maritime polar (mP): Cool and moist, often originating as continental polar air over the North American and Asian land masses and is modified as it moves out over the Atlantic and Pacific Oceans. Heated by the relatively warm water bodies this air mass becomes rather unstable resulting in blustery showers over the sea and windward coasts.

Continental tropical (cT): Hot and very dry, orginating from the arid and desert regions during summer. The least common air mass to affect the British weather. However, approaching from the south and south-east in summer it can bring record heat to southeast Britain, particulary in late-summer.
Maritime tropical (mT). Mild and damp in winter, very warm and muggy during summer. Originating from the Azores this air mass approaches the British Isles from the west, leading to overcast skies with prolonged rain for the western half of the country and to many clouds, sometimes broken with drizzle for the eastern half. In summer tropical maritime air often produces warm weather with abundant sunshine in the southeast.